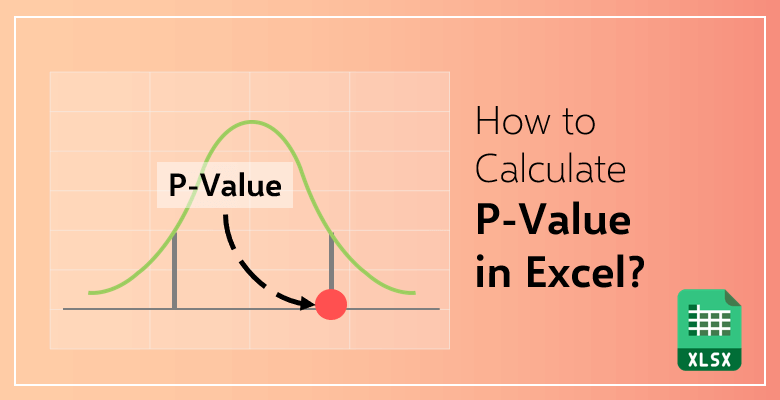 What is the P Value?

P-value is a statistical term that helps you to determine, if the hypothesis you use is true, the probability of the sampling variation. It simply tells us what are the odds of getting these results if our null hypothesis is true.

It is a very important and commonly used statistical term and can be easily calculated in data analysis programs like Microsoft Excel. In this article, you will learn how we use it, where do we use it and how can we calculate it in Excel in various ways.

Why Do We Need The P-Value?

While doing research with large populations you have to calculate the statistics for each individual. But even in such a case, you can’t be sure if something is happened because of coincidence or simply luck since it is impossible to observe everything. This is where statistics come in.

Statistical calculations cannot give you an absolute truth but they will help you have a good idea of your researches.

P-value allows us to test the hypothesis on our subject. We can compare the mathematical results to these hypotheses and reconsider our path without spending a great amount of time in research.

Where Do We Use The P Value In Real Life?

We use the probability value where we try to test a hypothesis. It can be about research or a simple bet we made with our friend.

It is easier to understand it with examples.

Let’s say you are working within the marketing area and your recent project is on cereals advertising.

You have got produced a video for social media and you have got the information for rather users skipped it or watched it for a long time.

Now how will you recognize if it worked? At this point, we use significance statistics.

A null hypothesis claims that there is no correlation between what you invest and the results you get. It does not affect the results.

During this example, the null hypothesis will be this: “There is not any relationship between the changes you are applying to the watch time.”

Then, the alternative hypothesis:

“The mean is greater than 20 seconds now.”

Now we have to set a boundary threshold to calculate if we are successful or not. This is called a significance level is additionally referred to as the alpha value. It can be any percentage you would like, it is absolutely up to you.

Now to calculate with certainty we should always have all the data of watch time. But in terms of your time and sources, you should take a sample from the population:

There are two situations that may happen.

Let’s work on another example.

Your friend and you made toss coin in the air: If it is tails you lose 5 dollars and if it comes heads you gain 5 dollars.

But there’s another possibility, the coin is tricky. While calculating the p-value you act like the null hypothesis is true.

You ask your friend to see the coin and when you hold it you realize it has two tails side and it is a tricky coin.

What did cause us to lose faith in our null hypothesis?

In a fair game of flipping coins, the chance of getting a heads or a tails is 50%. This is a situation where we believe the coin is fair but as the p-value drops our confidence in that hypothesis weakened too.

There is little chance of having random tails when the p-value drops under 0,05. So when you apply this statistical term on matters like cancer researches or effects of climate change it gains more importance.

How to Calculate the P-Value in Excel?

There is more than one way to calculate the p-value in Microsoft Excel. You can type down formulas or you can use Analysis ToolPak. This article contains how to do it both ways.

Use of Classic Excel Formulas:

Let’s start with the classic Excel formula way. There are two ways of doing this TDIST formula and T-test formula.

First of all, you will need a data set to calculate a p-value.

Now, in order to use the p-value formula on Excel, you should calculate a few things beforehand:

Pearson coefficient (r): It is a statistical term that measures the linear correlation between two data. You don’t have to know the mathematical aspect of it to calculate the p-value. You will see the simple formula for it in the next paragraphs.

Population (n): n is the total number of individuals in your data set.

T statistics: It is the ratio of the deviation of data estimated value from its assumed value to its standard error.

Degree of freedom: It is the number of individuals in the data set minus two.

Now, the Pearson coefficient will be written on F4 in this example. After you click it you will type the formula:

Next, you will type the number of individuals in the data set. If you know certainly how many individuals you have you can type it manually but if you don’t you can use the formula:

Why does the formula contain a C column only?

It is because we only need the individuals in one data set to calculate therefore one column will do. The cell G5 will now contain the number 10 in it. This is our population.

After that, you will calculate the degree of freedom. You will type:

Now you have all you need to calculate the P-value. The cell G8 will contain the formula for it. That is:

The second way of determining the p-value with Excel formulas is using the T-test formula. It is a little bit similar to the previous example but shorter.

Now type T-Test to the cell E8. You are going to write the T-test formula to the blank cell next to it. That is:

And this formula will give you the p-value directly.

Took Pak is a pack that allows you to calculate various statistical measurements automatically so it is easy and very handy. It is also easy to install.

Step 2: Activate the add-in by clicking the tick symbol next to it and after the OK button on the right column.

Step 3: If you managed to activate it properly a “Data analysis” button will appear on the top menu of your worksheet to the right side.

Step 4: Click the “Data analysis” button and choose the “t-Test: Paired Two Sample for Means” option. Click OK after that. A new window will appear.

Step 6: In the second row of the window you can select where to monitor your results. It can be a new worksheet or any blank cells. If you want the result on a cell make sure you lock the column and the row. Click the OK button after that.

P-value is easy to calculate and adapt in many different situations. It helps you to get the information you need without spending a lot of time or effort on it. It is even easier to calculate when you use statistical analysis programs like Microsoft Excel that come with the right tools and formulas. Let’s check Someka templates collection and download statistical templates to make your job easier!

Career Guide: Data Analyst
Have you ever wondered where to start for being a successful data analyst? Here is an article that shows everything about data analysis.
How to Calculate Confidence Interval in Excel?
This article describes the formula and explains how to calculate the confidence interval in Microsoft Excel with real-life examples.
How to Prevent Data Inconsistency & Discrepancy Problems in Excel Workbook?
Excel data inconsistencies can occur from cell to cell. It can seem exactly the same but not always. Check this guide to learn more!
Terms and Conditions Privacy Policy Sitemap
Copyright © 2015-2022 Someka Ltd. All Rights Reserved.